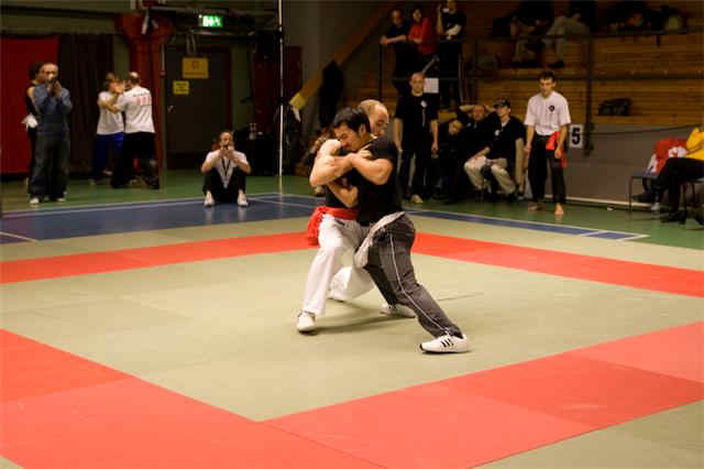 UK Tai Chi fighters Mike Abosch (sitting on floor) and Ben Morris (orange sash) won gold medals in the European Championships.
The Tai Chi approach to life is generally very easy-going and non-competitive even though, as a fighting art, it has been described as "gruesome"!

We practice the fighting skills in order to increase the odds of being able to protect ourselves and others in challenging situations.  We know several elderly people who's Tai Chi skills came in handy when they were attacked by muggers on the street!

We enter competitions not to gain the satisfaction of being "better than" others but to test our skills against a range of respected opponents in order to prove to ourselves that we can apply our skills effectively if we need to.

Even if you have no interest in fighting, learning the applications allows you to understand the movements,  perform them more accurately and therefore gain the maximum benefit from them.

Although practiced by most people for health, Tai Chi Chuan (Supreme Ultimate Fist) is a complete martial arts system.  The student is led through a step-by-step process, from learning a form to pushing hands partner exercises and the practice of martial applications.

Every aspect of Tai Chi Chuan must accord with the Tai Chi principles, as handed down by the great masters of old and documented in the Tai Chi classics.

Tai Chi is a martial art unlike any other.  A Tai Chi fighter does not exchange kicks, punches and blocks; instead they seek to make contact (parry, ward, intercept or destroy) with their opponent and manipulate the meeting to their own advantage.  By blending soft against hard and hard against soft, they create a circular motion (a Tai Chi Symbol).  In doing so, they seek to overwhelm, mislead or smother (using yang against yin) or take advantage of an attacker's momentum and energy by yielding, parrying or deflecting while remaining centred and balanced (using yin against yang).  During such an interaction of opposites (a fight) they keep their movements in accordance with the philosophical principles of yin and yang (expanding, contracting, sinking and rising) while remaining relaxed and calm.

Every Tai Chi sequence is made up of different techniques, constructed to allow the practitioner to practice the applications as if fighting a real person.  It must be noted, however, that some of the movements have been altered in order to make them fit smoothly into the form.  Tai Chi practitioners who are martial artists will at times practice the form imagining they are being attacked, and also imagining that they are using the movements of the form to defend themselves; at other times, their attention may be directed to correct posture, meditation or breathing.

Within the Tai Chi sequence there are three levels of fighting technique:

Level 3 - the highest level, where extra footwork is necessary to carry out the application correctly.

Although there are approximately 37 - 46 basic techniques in Tai Chi Chuan, these movements form the basis of in excess of 250 martial applications. The techniques of Tai Chi can be grouped into three categories: downing, immobilising and striking.

These applications destroy the attacker's balance, either causing them to fall or bounce away.

These techniques render the attacker motionless by locking their wrist, arm or neck joints.

These are either closed-fist or open-palm strikes, directed to vital areas of the body in order to inflict damage to a voilent or aggressive attacker.

Partner practice is designed to develop sensitivity and an understanding of strength, balance and relaxation.  It trains a high degree of co-ordination while maintaining contact with the partner.  The practice of pushing hands should be used to gain a better understanding of how Tai Chi can be used effectively as a martial art.  Learning to relax and yield while remaining in contact (sticking) with your partner is essential in the early stages of pushing hands practice.  Once developed, vigour and force can be applied (but remember, without the ability to yield and remain relaxed, you are not practicing Tai Chi).

After the basics of fixed step stationary single and double-handed partner exercises are mastered, moving step (Ta Lu) and free-fighting (San Shou) are waiting to be explored if the inclination is still there.